The unresolved dispute over how much water must be returned to the environment under the Murray-Darling Basin Plan is expected to dominate a meeting between federal and state water ministers today, with the Victorian town of Shepparton warning of dire social and economic consequences from further forced savings.

Goulburn Valley dairy farmers, who rely on water from the Murray and Goulburn rivers to sustain herds, have seized on figures published last week by the Murray-Darling Basin Authority showing that irrigated agriculture in their region has flatlined since the plan was rolled out.

Katunga dairy farmer Daryl Hoey, chairman of the Australian Dairy Industry Council Basin Water Taskforce, said although the figures were partly explained by commodity prices and drought, there was a direct correlation between lost water and lost production.

“It has to be recognised that the amount of water taken out of the basin is having a significant impact on the economy,’’ Mr Hoey told The Australian.

“We all signed on to the basin plan accepting there would be some pain and adjustment but it is far greater than we expected.’’ The MDBA assessment returns into sharp focus the politically charged question of what to do with a provision in the plan that allows for 450GL of water, in addition to the headline figure of 2750GL agreed to by Queensland, NSW, Victoria, South Australia and the commonwealth, to be returned to the environment.

Although the provision is conditional on water savings having a neutral or positive socio-economic impact, South Australia is adamant extra water is essential to the health of the river system.

Suzannah Sheed, an independent MP for Shepparton, believes local dairy farmers are already at a tipping point and further water savings will devastate the local economy. “We have seen very considerable, negative impacts,’’ she said. “We were always willing to give up the 2750GL but that has brought us to a tipping point. Any more would be severely damaging and in a drought, disastrous.

“As a community, we want to see a decision made that the 450 is not doable, that it’s off the table, so we can get some certainly. At the moment, people are at a loss as to where we stand.’’

Committee for Greater Shepparton chief executive Sam Birrell said water savings already realised under the plan had improved the health of the local rivers but the MDBA figures were clear evidence that irrigated agriculture had stagnated.

He said that if more water savings were imposed on local farmers, herds, orchards and export markets would be lost. “I don’t know how a place like Shepparton comes back from that,’’ he said. “What worries me as a representative of this community is not what has already happened but what we are being set up for in the future.’’

The above article was published by Chip Le Grand; The Australian on 19th December 2017 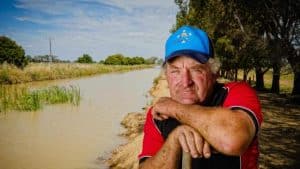 Claims of ‘blackmail’ and communities ‘held hostage’ at ministerial meeting

Farmers and regional communities remain lost at sea after a ministerial council was unable to break a political stalemate on the implementation of the Murray Darling Basin Plan.

Ahead of the meeting, member of the Basin Community Committee Russell Pell was optimistic the discussion would be about “constructive ideas – not political grandstanding”.

The three ministers are at loggerheads over a plan to move 450 gigalitres of environment flows upstream to South Australia.

NSW Water Minister Niall Blair said communities would be “decimated” by the loss of 450 gigalitres.

He said with SA Best leader Nick Xenophon “doing damage” in the lead up to the state election, he wasn’t surprised by South Australia’s Ian Hunter’s stance.

“We are not going to allow NSW communities to be held to ransom for political gain in South Australia,” he said.

Farmer and Australian Dairy Industry Council chair Daryl Hoey said there were ongoing frustrations at the seemingly lack of progress on the plan.

“I worry five years down the track we’ll have a water crisis, a food crisis, industry struggling and what are we going to do about it?” he said. “Industry is under real threat.”

Albury mayor Kevin Mack said it was not good enough South Australia was asking the Border to “suck eggs” and adopt an unsustainable plan.

Cr Mack said it was time farmers and those who represent them stood up for their industries.

“I can’t believe people in Canberra are making such ridiculous decisions, and states need to step up and say ‘Enough is enough’,” he said.

“The MDBA and ministers need to get their stuff sorted, it’s getting ridiculous.”

Mr Hunter said meetings would now be occurring “offline” between individual states rather than as a group.

Mr Hunter asked all federal ministers from South Australia to support a disallowance motion to prevent previously agreed upon points passing until the issue had been resolved.

“Today just confirmed our deep suspicion that NSW and Victoria never planned to deliver on the 450 gigalitres plan,” he said.
“They only wanted the down-water requirements.”

This article was published by Sophie Boyd; The Border Mail on 19th December 2017

© 2016 Committee for Greater Shepparton | Crafted with